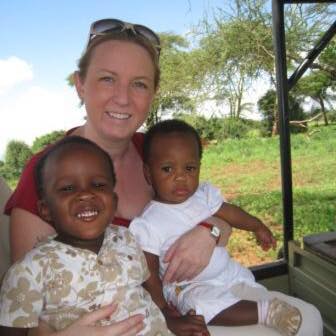 When Kirsten Bowman’s kids start learning a new subject, the experience is different than for most.

Instead of opening up a new textbook on their desk, they’re more likely to get a new stamp on their passport.

Kirsten gives international education a new meaning. As a university professor and Outschool teacher, she travels the world with her two children, often coming and going between Europe and America. To complement the family’s adventures, she designs personalized lessons for the kids based on locations they visit.

Kirsten’s exposure to international cultures relates closely to her teaching passion, which is human rights. While the topic includes subject matter for mature learners, Kirsten makes important topics accessible to learners of all ages and abilities.

“It's frustrating to me that human rights aren't touched on until much later in a student's life,” Kirsten says. “I think that students should have access to this information and that it's really beneficial for people who are young to be understanding a global perspective.”

"It's really beneficial for people who are young to be understanding a global perspective.”

She prides herself on facilitating valuable discussions in her live online classes about human rights issues, even when some of her learners are elementary-aged. This is possible because the topic of human rights touches on everything from atrocity issues and war crimes to refugee issues and immigration. While more intense topics are left for older learners, Kirsten teaches her most basic human rights classes to groups of five to eight-year-olds.

“You can do this in an age-appropriate way that isn't scary, that isn't alarming to kids,” Kirsten said.

She does this by introducing broad ideas and relating the concepts to learners’ life experiences. For example, in a discussion of global hunger, she asks learners to reflect on the easy access to food in their own lives and compare this to experiences of less fortunate children. Instead of diving into the complexities of government and non-profits, she discusses the concept of “big helpers” who work to solve problems around the world.

By learning about human rights issues at a young age, Kirsten notices “it becomes a part of who they are.”

Kirsten’s teaching approach, centered around engaging learners through interaction, discussion, and debate, was developed in her experience as a college professor. She currently splits her time between San Francisco and Sweden, where she teaches courses on human rights at Uppsala University.

Whether in the college classroom or the Outschool classroom, Kirsten feels lecture teaching is draining for her and the learners. The real learning happens when kids engage with the course material and bring their own unique perspectives to the subject matter.

“I want to generate a lot of discussion and debate in the class. So my classes are filled with a lot of student interaction and conversation,” Kirsten said. Although classes feature plenty of learner interaction, there is space for everyone to learn in the best way for them.

Kirsten teachers human rights in an age-appropriate way that isn't scary for kids.

“If learners want to put their video off and just sit and soak it in, that's okay by me,” Kirsten said. However, she also notices that “part of the way through an eight or ten-week class, I'll see a video on or the mute button will come off their speaker, and they begin to engage.”

Kirsten has even inspired young learners to embrace the same experiential learning she offers to her own children. She recently received a picture from the mother of a young boy who had taken several of her classes. He had traveled to a youth human rights rally on the anniversary of the UN’s Universal Declaration of Human Rights. The boy’s mom told Kirsten that he “had been inspired by my classes to join this organization and was getting involved in human rights issues with young people.”

“Those things make me so happy,” Kirsten said, “because then I think okay, this is making a difference and people are getting out there. This is going to change the kid's perspective and he’s going to be thoughtful. That makes me really excited.”

6 months ago • 4 min read
For Teachers

Celebrating Our Educator Community on Outschool

a year ago • 2 min read
For Teachers

No results for your search, try something different.